The first in a series about how big ideas are good for business.

Since the inception of the idea for this series, a lot has happened in the world. This first topic has taken on greater significance in light of the events in late May since the aftermath of George Floyd’s unfortunate death at the hands of a Minneapolis police officer.

Let’s get started at the beginning…

Back in my studio days, I worked on the Cabot Oil & Gas annual report for 6 years. Each fall, we would meet with the CFO and his team to discuss general themes and topics that the executives wanted to communicate in the book. We would then go back to the studio and brainstorm how to best articulate those messages into a compelling narrative. If all went according to plan, the brainstorming would guide the visual approach as well. 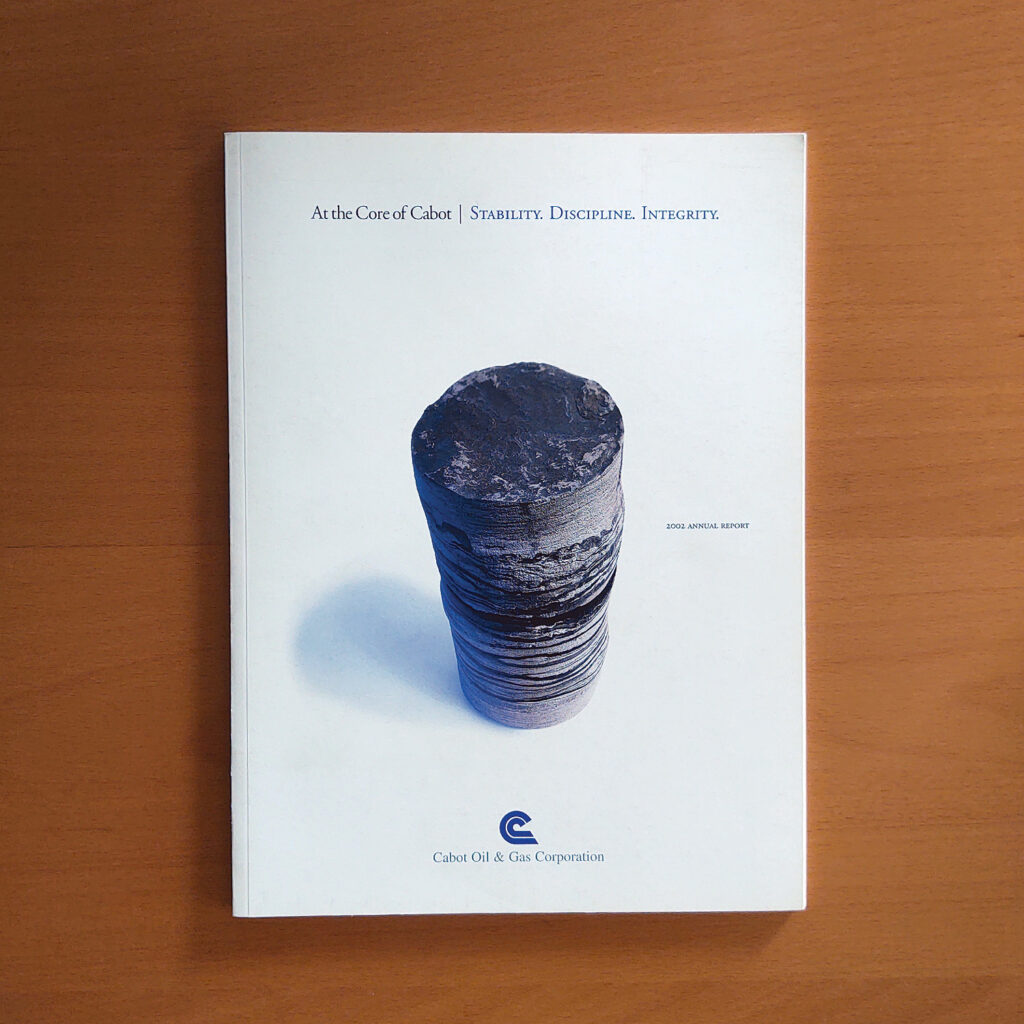 For the 2002 annual, we were given very explicit direction: they wanted to talk about their company values.

Before going too much further, I want to clear the air. I’m not a fan of corporations talking about values or other soft, fluffy attributes about their brand. Most, if not all, companies can make similar claims, so from a branding perspective there is little to no differentiation between the competition. I’m not talking about taking sides on an issue, rather about inherent qualities about how they see themselves.

Secondly, I find it weak when companies hang their hats on these platitudes like they’re something special. For instance, it should be table-stakes that they will act with integrity when you’re a publicly-traded company. I don’t think they should be boasting about it.

Further, extolling your virtues is merely chest-thumping in my book, of which I am not a fan of, either. No one has ever trusted a brand because they said they were [insert value here – generous? “woke”? caring?]. No one cares how great you say you are.

Lastly, in my experience, I have found that when most companies that say they are [insert value here – i.e., diverse, responsible, team-focused, family-friendly, etc.], they are often times just the opposite. The only way a brand can truly exhibit any of these wonderful qualities is by living them on a daily basis. As Holden Caulfield might say, talking about all this in marketing pieces makes it all sound phony.

Just to be clear, I am not a fan of this sort of virtue-signaling approach to branding. Not that a company cannot or should not strive for high ideals, but should this be the focus of your marketing?

Back to the annual report: How do you reconcile all these issues and still meet the client’s expectations?

It takes a big idea.

My father was a civil engineer. When I was a kid, I remember going to his first office, which was nothing more than a tinky building the size of a double-wide, with only enough room for him, his partner and their receptionist because half of the space was filled with shelves containing core samples.

If you don’t know, core samples are small sections of the earth drilled out and pulled up to the surface so that geologists or other scientists can study them to get a better understanding of what the ground is made of under their feet. In the case of a civil engineer, they wanted to understand what is underneath the structure they are building so that it doesn’t fall down. Kind of important.

This is where the real value of creativity comes into play. Being able to make connections with the knowledge gained through life experiences gives shape to new, big ideas, connecting seemingly disparate bits into one cohesive thought. Big ideas are unifying, encompassing many different facets of life to make the something new, more accessible and relatable to more people. It becomes easy and natural to make the leap from core samples to core values. Both give us understanding — core samples tell us about the earth, whereas the core values help us understand why we can trust a company.

The 2002 annual was titled “At of the Core of Cabot,” with a core sample exquisitely photographed for the front cover. With this image we are visually telegraphing to investors that we are giving you a reason to believe.

This big idea adds depth (no pun intended) and context to an otherwise fluffy marketing pitch. Because their business is grounded (pun intended) in core samples, it becomes a perfect metaphor to talk about Cabot’s values: stability, discipline and integrity. These values are intrinsically intertwined with their beliefs and the way they operate their business, much in the same way a core sample is central to oil and gas exploration.

There was one key ingredient to ensuring the success of this particular big idea, and that was that Cabot could back it up. That was what the annual was all about after all. They used language that anyone else can use for themselves, but once you dig into the report, readers found that Cabot can back up all these claims.

And that leads me to back to virtue-signaling, becasue there is a lot of it going around these days. It’s one thing to say you are a certain way, that you believe or feel this way or that. But where it counts the most is in your actions. Can you live up to what you are saying?

When it comes to building a strong brand, if a company can live up to its high ideals, I’ll hang my hat on that messaging every day.